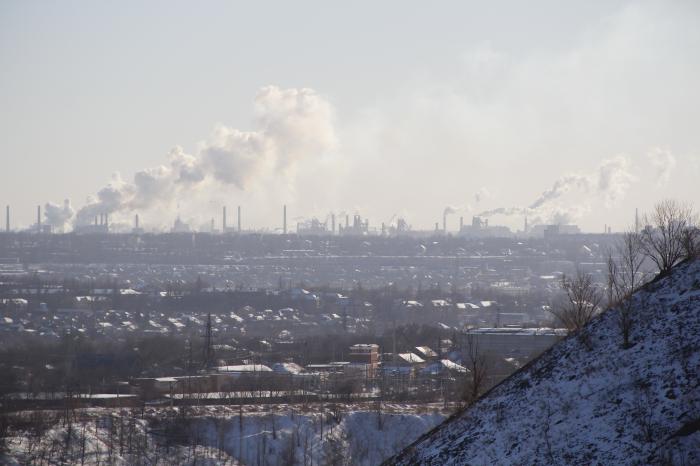 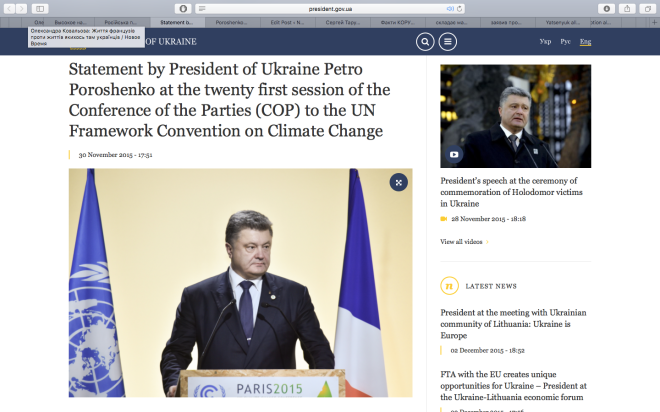 Have we all missed the point on Petro Poroshenko’s speech? How is it possible that all attention has been diverted to his “Paris/Donbass” bit, which is as tiring to discuss as are all of the critics that followed? Meanwhile, his main announcement was totally forgotten: “Ukraine set a target not to exceed 60% of 1990 Greenhouse gas emissions level in 2030”.

The written statement may be found here.

The full-length video of the statement may be found here.

What does it mean? Back in 1990, the Ukrainian Socialist Republic emitted about 920 million tons of Co2. Following the dismantling of the Soviet economic net and heavy industry, independent Ukraine emits about 400 million tons of Co2. When Petro Poroshenko announces Ukraine will not exceed 60% of the 1990 Co2 emission level, he actually allows his country to INCREASE his Green Gas House (GGH) emissions, up to 552 million tons!

Meanwhile, most of the speakers at the COP21 opening speech talked about some “last chance”, “unique opportunity”, « a time to take responsibility”… Yet these statements have been done before. And the fact the Petro Poroshenko, among other representatives, got away with his non-committment seems to indicate that this COP21 is yet another round of blabla.

And don’t forget the emphasis Petro Poroshenko places on “restoration of Donbass” seems really overstretched. No one needs Donbass to be restored to do something about polluting industries in Mariupol, Kremenchuk, Kryviy Rih… The energy sector produces 70% of GGH emissions. 14 coal power plants emit 23% of these GGH. Who needs peace in Donbass to fix them across the country?

Ukraine is one of the least energy-efficient country in the world. Yet the only time that Petro Poroshenko mentions energy efficiency, it is to wish that “the new Ukrainian Donbas should be of a focus in energy efficiency”. There are about 40 million people living in Ukraine-controlled regions of Ukraine. I would be quite bewildered if they would really need peace in Donbass to isolate their windows, modernise their heating system, install gas metering, fix up their roofs… A clever national policy of tax incentive and micro bank loans and intense pedagogy might just do the trick.

War is a terrible thing, whichever name you want to give it. But what is happening in Ukraine is meant to last a long time. Let’s think about the next decades: will occupied Donbass remain the official reason-not-to-do-anything-else that is it now?

NB: the data used in this comment come from the National Ecological Center of Ukraine.